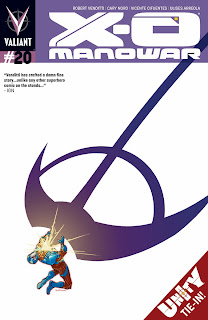 After the all the action in Unity # 2, Valiant hits you again with the latest issue of X-O Manowar which resumes the action where Unity left off.

As stated above this resumes right after Unity # 2 so it’s highly recommended, heck one could say it’s required, to read Unity # 2 before jumping into this. Also, because of that I’ll try and not give too much details about the plot in this review in case you don’t know what’s happening from Unity # 2. You can read the review for that here. On with the review.

This issue tells it’s story through action more than expositional monologs and the like. The actions Aric takes against Harada and his team gives insight into his character and shows that he is more resourceful than people would think. There is some meaningful dialog exchanged between Aric and the Eternal Warrior and the Eternal Warrior definitely does some useful stuff in this issue. If you’ve read the review for Unity # 2 you’ll know what I mean.

After the main action scenes we see a build up for what looks to be round 2 or maybe even round 3 and with things changed it definitely leaves the reader with a sense of wanting more.

With this issue being mostly action the art really shines. Seeing the Manowar suit pull off some crazy 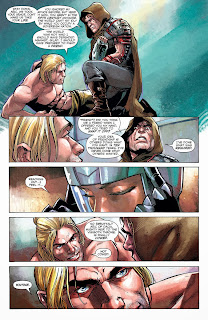 feats and Harada’s Harbinger powers is fantastic. The panels look like extremely well polished animated movie stills. The art in this is absolutely fantastic.

Even while going through this issue looking at minute details there really isn’t anything to complain about in this issue. There’s a good narrative, lots of action and fantastic art that really conveys how great the action is. I give X-O Manowar # 20 a 9.5 out of 10