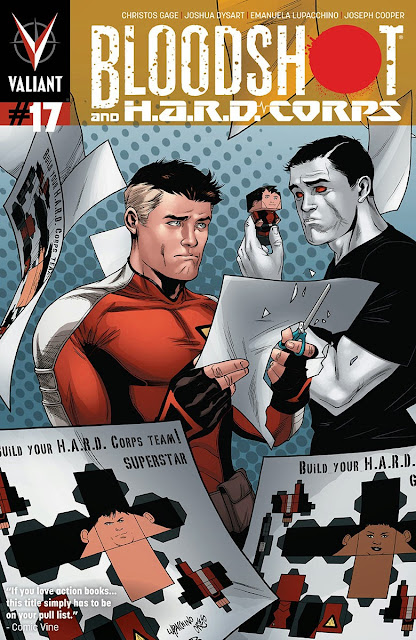 BLOODSHOT & H.A.R.D. CORPS # 17
Written by Christos Gage & Joshua Dysart
Art by Emanuel Lupacchino, Joseph Cooper, Guillermo Ortega, John Lucas & Matt Milla
Valiant Comics
FLIPPING THROUGH:
The H.A.R.D. Way comes to its spell bounding conclusion with 4 face offs within the book. We have Superstar, Flatline and Genius facing off against some of Harada’s psiots in Max & Stronghold. Granite, Discipline and Vagabond take on the psiot Ion. Major Palmer has some face time with Harada while Bloodshot has an interesting battle with a part of himself. The battles lead to some final confrontations that leave Bloodshot and his team changed … some of them permenantly.

Honestly, I am impressed. I could not tell it was two artist till after looking at the issue for a second time. Lupacchino’s pencils and Copper’s are so similar, you can barely tell a difference. There is some great detail, clean lines and easily distinctive characters and backgrounds. There is a lot to look at this issue but our art team does not disappoint.  From the kinetic action to the emotional moments, there is a great sense of expression. The panel work was solid from beginning to end.  From Bloodshot to Flatline to Harada to even our surprise villain, they all looked very distinct. The inks were solid, adding depth while the colors were top notch.  A great job for the last part of this storyline.
WRITING:
Gage and Dysart really bring together all the plots they were playing with throughout the first three issues of their run here. There is definitely development and change throughout the entire issue as we get to see some spotlight on Superstar, Bloodshot, Palmer and many of the others.  Gage and Dysart use the space in this issue to near perfection as no one was left out, including the support staff of the H.A.R.D. Corps. The pacing of the issue was perfect and there was definitely impact felt by many of the characters this issue that just would not be denied. Bloodshot, Palmer, Superstar … and most of the team were all gained some great development that felt very natural to the evolution of each of the characters from where they were from the start of the storyline. Dialogue felt very natural and Gage and Dysart continue to write some very engaging characters.
OVERALL IMPRESSION:
Great art. Great Story. A very satisfying finish to the first arc of this new era for Bloodshot and The H.A.R.D. Corps.
RATING:
This issue was amazing. Bloodshot & H.A.R.D.  Corps #17 gets a perfect 10 … out of 10.