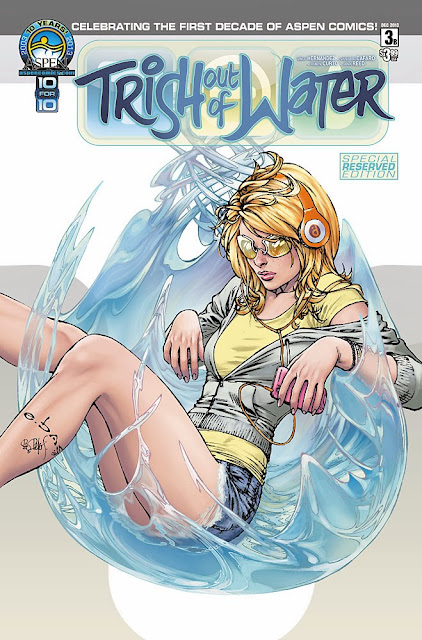 Trish is kidnapped only to be rescued by an unlikely … let me rephrase that … an unsuspected hero. We get more into the origins of Trish’s parents as Detective Bruno decides to face off against the Blue.

Cafaro has hit his stride here. With a good amount of detail with his sketch-like, but detailed style, Cafaro does a great job with making some visually appealing panels. Everyone looks different and distinct, good amount of background detail and some strong panel work make up a great looking book. The colors by the various colorists continue to make Trish Out of Water a more visually distinctive book, alongside Cafaro’s art. The use of white is somewhat diminished here and it definitely works for the book. Overall, a strong showing by this art team.

Hernandez continues to give us hit after hit this issue with good action, character development and plot. We learn some answers to some burning questions this issue but Hernandez makes sure for every question answered, there is a new question asked. The characterizations of Trish, Detective Bruno and more were really solid with great, authentic dialogue and some outstanding character moments this issue that definitely will grab readers interests and feel relatable. The issue had some excellent pacing and Hernandez does his use surprise reveals this issue … but better as one surprise is out of left field while the other could have been surmised if you paid attention to the previous issues. Kudos to Hernandez for writing a solid issue.

From the word go, this was a solid issue from beginning to end.