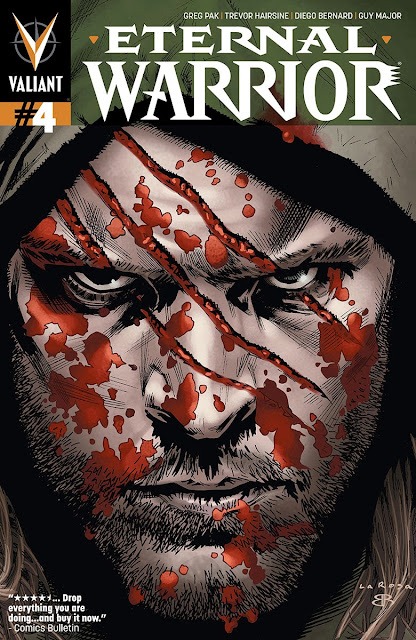 Gilad and Xaran get the scoop on Nergal’s new general from Buck. Buck also gives them the lowdown on the Goddess of the Earth. And after that, Gilad STILL wants to kill her.
ART:
Hairsine and Bernard do a  fantastic job again with this issue. The art was nice and detailed. Sicat and Cifuentes inks do a great job cleaning up Hairsine’s rougher pencils to make it look cleaner this issue. The transition between the two artists was near seamless.  A great amount of detail in the panels alongside with some great emotional pieces throughout the book really expressed a lot of the story without words. Bernard really does some magnificent pieces this issue and look forward to more of his work. Major does a breathtaking job on the colors. Overall, a good job by this art team.

Pak ends his first arc on Eternal Warrior with a LARGE BANG. This issue had an amazingly strong amount of emotion and heart that I had not felt since reading Gilad during Archer & Armstrong # 0. This was definitely the high point of the issue. The dialogue in this issue was  nothing short of brilliant. It was powerful, authentic  and moving. There was so much to this issue but it was extremely well paced. And there is some great character development for Gilad, Xaran and even Mitu that felt like a real evolution of what they were going through.  Pak also gives us enough twists this issue to make you go “WTF,” but in a good way. Overall, Pak written his best issue yet.

Hands down the best issue of the series yet and I want more.