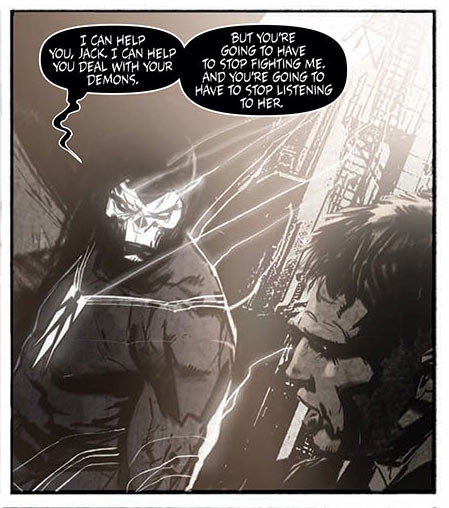 Valiant is proud to present an advance preview of Shadowman #14! Peter Milligan and Roberto de la Torre‘s savage exploration of the Shadowman mythos continues here on January 8th in the next chapter of the brand new story arc, “Fear, Blood, and Shadows”!

As the Shadowman loa begins to exert its influence in even more unexpected ways, Jack Boniface is quickly coming to terms with the darkness inside him and finding out firsthand just how brutal unchecked power can be. With word of Shadowman’s increased unpredictability spreading across New Orleans, Jack’s former allies in the Abettors grow even more suspicious of their latest trainee…and begin to consider drastic measures…

On January 8th, pick up Shadowman #14 to find out why fans and critics agree – master storytellersPeter Milligan and Roberto de la Torre have unleashed a devastating new vision of New Orleans’ nocturnal guardian:

“Sick, twisted and absolutely engaging… Time to turn back to the darkside, people.” – IGN
“4.5 stars… We got ourselves a damn fine comic.”– Comics Bulletin
“I can’t wait to see how this arc goes forward… Must Read” – The Weekly Crisis
“Milligan and Roberto de la Torre have brewed up the perfect cauldron…” – Bloody Disgusting

For more information on Shadowman and the rest of the Valiant Universe, visit Valiant on Facebook, on Twitter, and at ValiantUniverse.com.