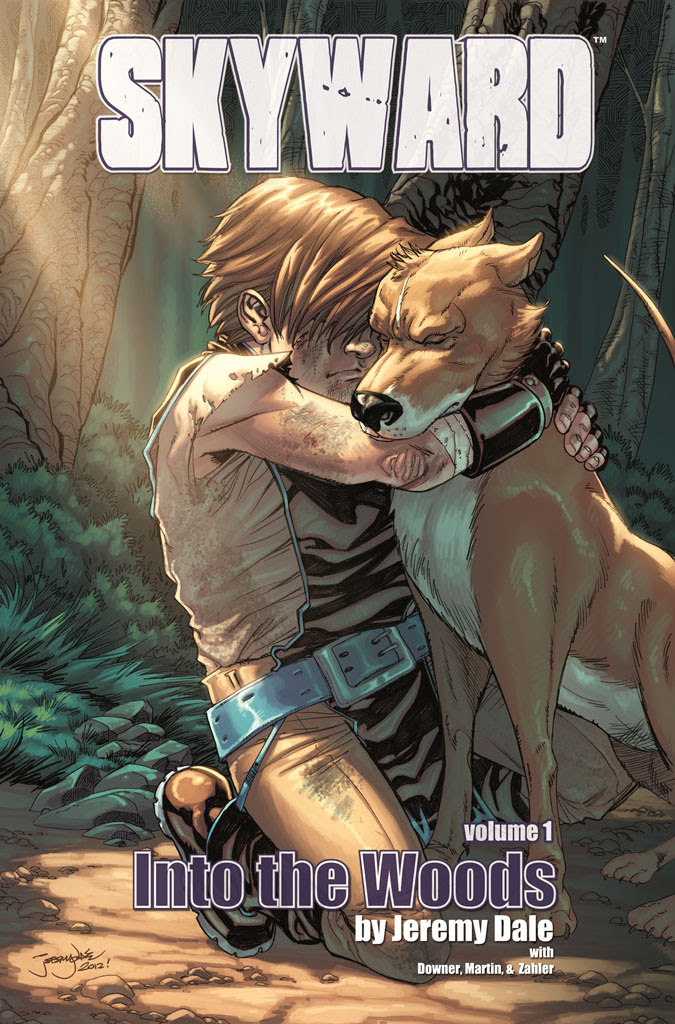 SKYWARD,The all ages adventure series that has taken the comics industry by storm has made an indelible mark in it’s short run. Called “A Winner” by Geeksofdoom.com Action Lab Entertainment, the new gold standard in comic book entertainment is proud to announce the release of SKYWARD: Into The Woods TPB. The trade paperback collects the first 3 issues as well as the Free Comic Book Day story from the critically acclaimed series. Created, written and drawn by Jeremy Dale (NFL:RushZone, G.I.Joe) , Skyward is the story of a young boy named Quinn, The son of a legendary warrior named Corin. Living in the Idyllic countryside with not a care in the world his life is turned upside down when an old friend of his father manages to track them down. Herod has come to recruit Corin back into the king’s army, with the promise of adventure and fame.
But all ends in tragedy.

Now Quinn and his dog Jack are on the run, headlong against a threat more terrible and a world more fantastic than they ever imagined.

SKYWARD: Into the woods is in stores now!

About Action Lab Entertainment
Formed in 2010 with the purpose of pooling their collective talents into a single, powerful entity, the members of Action Lab Entertainment have countless years in multimedia publishing, design, and business.  Their first release, Fracture, was successfully funded through Kickstarter and since then they have continued their mission to produce high quality, genre-spanning entertainment.
Since its formation, the accolades for A.L.E continue to build on a daily basis.  Among its more popular titles are all ages material like the Eisner, Glyph, Shel Dorf Award nominated series PRINCELESS, NFL RUSHZONE (based on the Nickelodeon Television series), Jamal Igle’s MOLLY DANGER, Artist/ Writer Jeremy Dale’s hit series SKYWARD,  and Gale Middleton’s (My Little Pony, The Littlest Pet Shop) monstrously adorable VAMPLETS.

For more information on all of their titles, visit www.Actionlabcomics.com