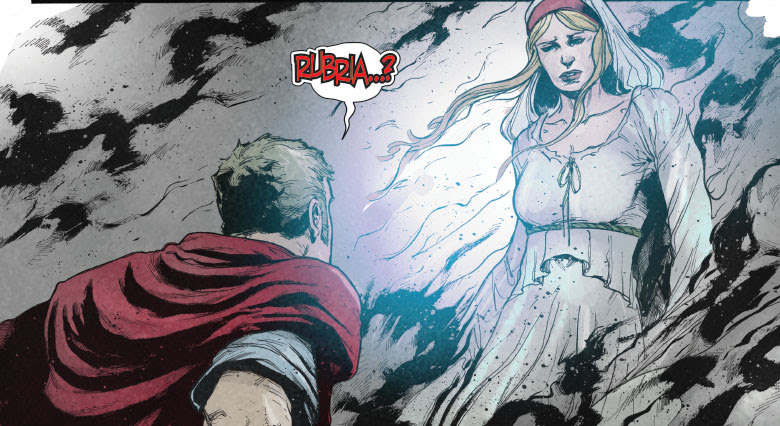 BRITANNIA: LOST EAGLES OF ROME #3 (of 4)
Written by PETER MILLIGAN
Art by ROBERT GILL with JUAN CASTRO and BRIAN THIES
Colors by JOSÉ VILLARRUBIA with ANDREW DALHOUSE
Letters by DAVE SHARPE
Cover A by DAVID MACK
Cover B by MJ KIM
Variant Cover by ANDRES GUINALDO

Where have the eagles landed?

Antonius Axia has survived the wilds of Britain and witnessed the horrors of his own homeland…and now, the trail of Emperor Nero’s stolen eagles relics has led him and gladiatrix Achillia to the newly annexed province of Egypt! But, those who once held power in the Fertile Crescent might not be so quick to welcome them…or any other nosy Romans, for that matter!

When most people go on a journey, they bring back a souvenir…but most people usually stick to t-shirts and keychains, not unearthly creatures like the ones Quantum and Woody brought back from the “Otherverse”! Now, a giant monster is wreaking havoc on Washington D.C., and another anomaly – known only as “The Screaming Man” – is slowly getting acquainted with our reality. Is the world’s worst superhero team going to do anything about it? Hopefully, or this would be a really weird comic!

Who is Shadowman? It’s a question Jack Boniface has asked himself ever since he was called to protect our world from the demonic forces that lie beyond… Now, as he rides backseat in the body of a Paleolithic hunter, eons before his own birth, he will finally learn the shocking true identity of the loa spirit bound to his soul! And, as a shadow begins to spread across West Africa, Jack must defend his fellow tribesmen…or else be trapped in 40,000 B.C. forever!

Watch the live-action digital series, then jump headlong into the fight-fueled showdown of the century as acclaimed writer Eliot Rahal (The Paybacks) and red-hot artist Joe Bennett (Teen Titans, Deathstroke) reveal the full scope and adrenaline-drenched intensity of NINJAK VS. THE VALIANT UNIVERSE!

Colin King is Ninjak, MI6’s deadliest intelligence operative and weapons expert. When the ruthless assassin Roku exploits his greatest weakness, Ninjak will be forced to betray his closest allies. Now, on the run, he must face off against the most powerful heroes known to man for a high-octane, take no prisoners, trial by fire more perilous and more unpredictable than any he’s faced before. In 2018, the world’s most dangerous super-spy goes to war with the Valiant Universe…

Guest-starring X-O Manowar, Bloodshot, Livewire, Archer & Armstrong, Shadowman, and more, don’t miss the ULTIMATE JUMPING-ON POINT for the most acclaimed and hotly followed publisher anywhere in comics today as Ninjak leads an all-star introduction to the most brutal fighters the Valiant Universe has to offer!

Collecting NINJAK VS. THE VALIANT UNIVERSE #1-4.