The Dreamer Vol 3: The Battle of Harlem Heights hits stores March 19th, 2014
Digital collection of The Dreamer catches up with print releases in April

IDW announced today that the next release in the graphic novel series “The Dreamer” will hit stores March 19th, 2014. The Dreamer Vol 3: The Battle of Harlem Heights (ISBN 9781613778869) is the third and final book in the story arc The Consequence of Nathan Hale and will be available in comic book stores as well as book trade venues. The Dreamer has been nominated for numerous Harvey Awards and is a fan favorite among comic book and mainstream readers alike. The digital versions of all three books in the series will be available in the IDW and Comixology apps as well as iBooks, Kindle, Nook April 16th, 2014.
Early reviews of The Dreamer Volume 3: 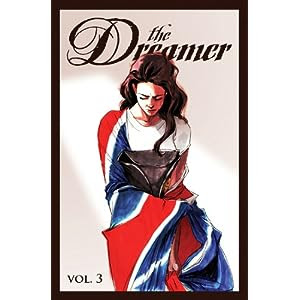 “The cliffhanger—involving Beatrice’s increasing distance from her friends and family as they worry about her health, mental confusion, and seemingly poor choices—is a nail-biter. “-Publishers Weekly
“The amount of emotion in this volume was palpable from the moment it began and Innes sucks readers in with it and its multi-layered story. Innes mixes history so well with her story that you would almost feel that it was fact. Kudos to her writing skill.”-Herotaku.com
“5 out of 5 stars.” –Jazmaonline.com
Book 4 in the series is planned for 2016.
About The Dreamer Volume 3:
Bea Whaley’s vivid dreams about the American Revolution continue in this all-new graphic novel! In the 21st Century Bea’s friends and family begin to suspect that something is wrong, but Bea knows she cannot tell them about her dreams. As tensions rise, she struggles to return to the 18th century, where her friends’ lives are threatened by the ever growing war – and this time, she just might be too late to save them.
Visit www.thedreamercomic.com for more information.
Like us on Facebook: https://www.facebook.com/pages/The-Dreamer-Comic/146005828774488
Follow Creator Lora Innes on Twitter: https://twitter.com/LoraInnes