Valiant decides to unleash new variant covers featuring their characters in the upcoming Valiant Digital series, Ninjak vs. the Valiant Universe. These photo covers will have Michael Rowe playing Ninjak, Jason David Frank as Bloodshot, John Morrison as the Eternal Warrior and more throughout some of their books.
Ninjak vs. the Valiant Universe  will chronicle Ninjak becoming an outlaw after being set up.  The series will be produced by popular Bat In the Sun, the creators behind the popular Super Power Beat Down.
Press Release
Valiant Unveils NINJAK VS. THE VALIANT UNIVERSE Variant Covers – Cutting into Comic Shops All Summer Long!
Get Your First Look at the Upcoming VALIANT DIGITAL Webseries with Never-Before-Seen Photo Covers Revealing Stars Michael Rowe, Jason David Frank, John Morrison, and More in Action 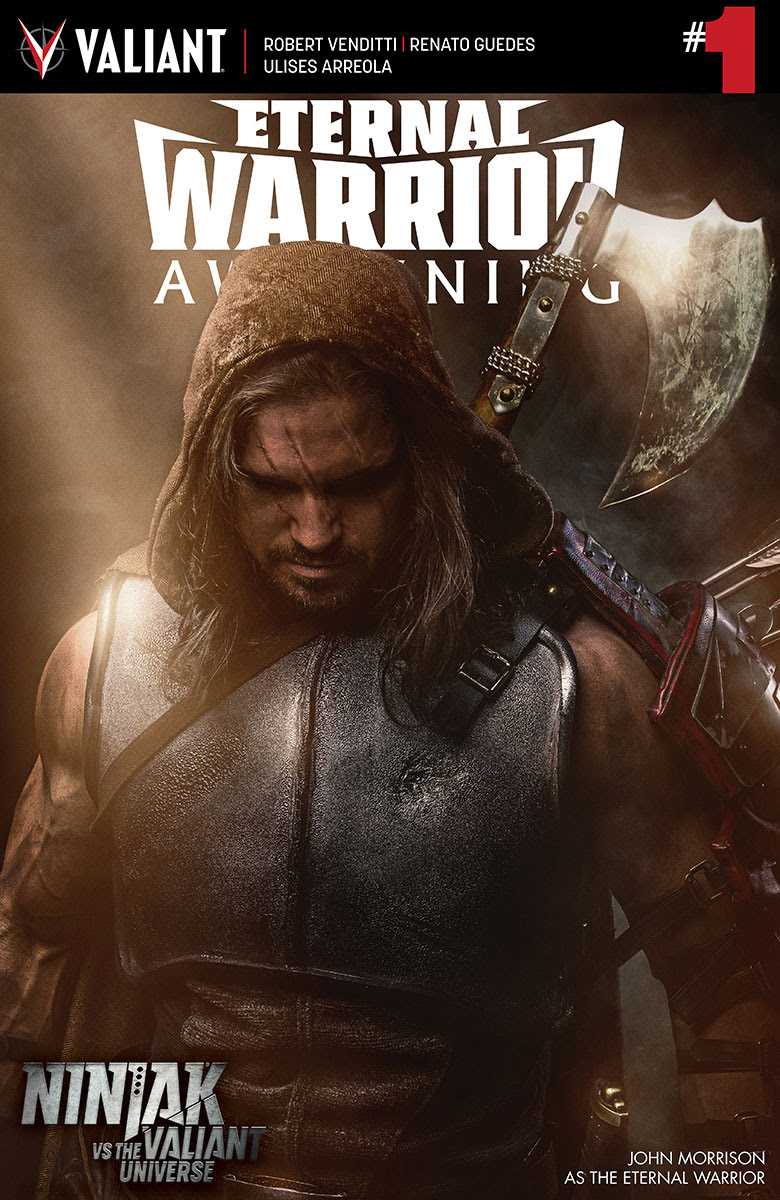 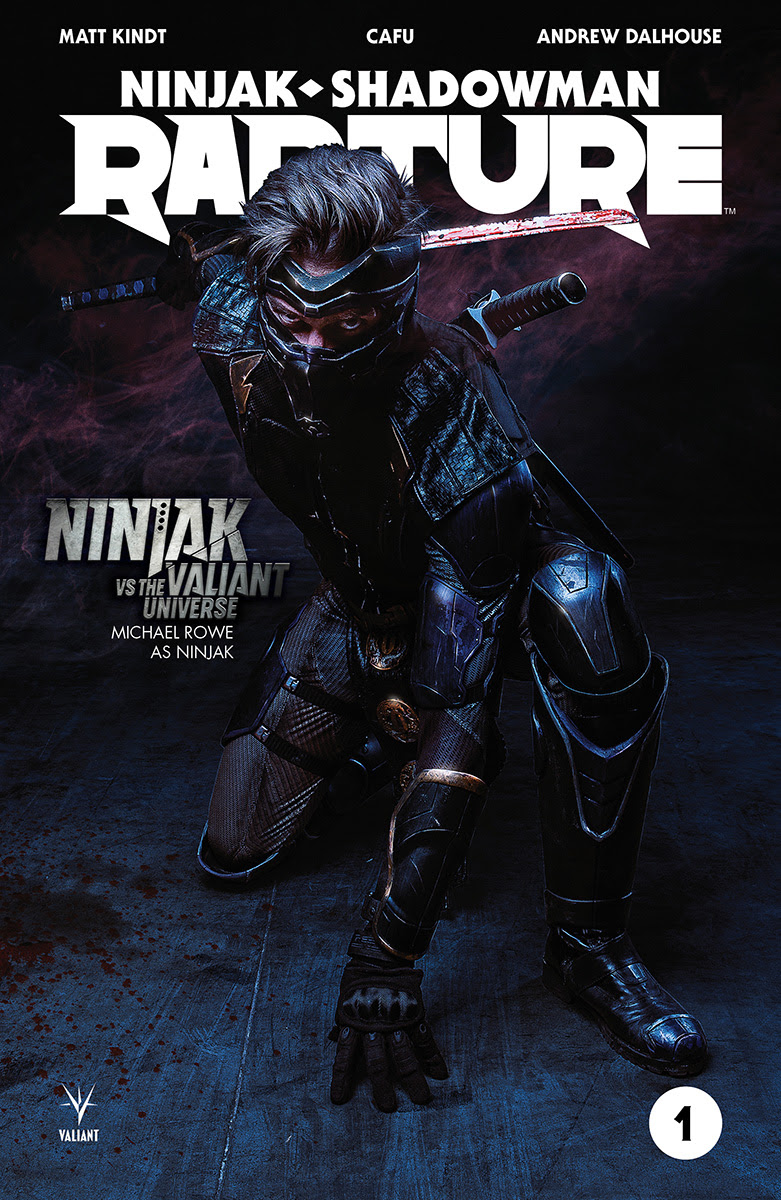 As revealed at Gamespot, Valiant is proud to unveil the first look at the upcoming NINJAK VS. THE VALIANT UNIVERSE series of variant covers – an all-new line of steel-shattering shelf covers spotlighting the battle-hardened heroes of the upcoming VALIANT DIGITAL webseries! Arriving on shelves in comic shops everywhere from May through August, get your first look at the hotly anticipated live-action debut of Valiant’s most iconic and renowned heroes – including Ninjak, Bloodshot, Eternal Warrior, Livewire, Armstrong, and more – as realized by the series’ star-studded cast.

Announced last year at New York Comic Con, NINJAK VS. THE VALIANT UNIVERSE is a first-of-its-kind, live-action digital series. Premiering online in late 2017, the bone-shattering, six-episode series will pit MI-6’s master assassin, Ninjak, against a gauntlet of Valiant’s most formidable heroes for a bloodstained battle royale torn from the pages of the largest independent superhero universe in comics. The series will be the first project from VALIANT DIGITAL – a new division of Valiant Entertainment committed to producing original content in live-action, animation and emerging media created specifically for the digital arena.

Colin King is Ninjak, MI-6’s deadliest intelligence operative and weapons expert. When the ruthless assassin Roku exploits his greatest weakness, Ninjak will be forced to betray his closest allies. Now, on the run, he must face off against the most powerful heroes known to man for a high-octane, take-no-prisoners trial by fire more perilous and more unpredictable than any he’s faced before. In 2017, the world’s most dangerous super-spy goes to war with the Valiant Universe…

Now, before the world’s deadliest intelligence operative collides with an awe-inspiring cast of heroes from across Valiant’s groundbreaking, award-winning superhero universe in 2017, take home a piece of the action with the NINJAK VS. THE VALIANT UNIVERSE line of variant covers – hitting stores all summer long on the following Valiant Entertainment releases:

ETERNAL WARRIOR: AWAKENING #1
Written by Robert Venditti; Art by Renato Guedes
On Sale MAY 10thRAPTURE #1 (of 4)
Written by Matt Kindt; Art by CAFU
On Sale MAY 24th

RAI: THE HISTORY OF THE VALIANT UNIVERSE #1
Written by Rafer Roberts; Art by Francis Portela
On Sale JUNE 14th

Each NINJAK VS. THE VALIANT UNIVERSE variant cover will be available as a standard “order all” shelf cover and will be available for retailers to order in unlimited quantities at the standard suggested retail price.
Directed by Aaron & Sean Schoenke of Bat in the Sun Productions – the creators of the massively popular YouTube sensation Super Power Beat Down – and written by Aaron Schoenke, Sean Schoenke, and Joe Harris, NINJAK VS. THE VALIANT UNIVERSE stars Michael Rowe (The CW’s Arrow and The Flash) as Colin King aka Ninjak; Jason David Frank (Power Rangers) as Bloodshot; John Morrison (WWE, El Rey’s Lucha Underground) as the Eternal Warrior; Chantelle Barry (90210, Entourage) as Roku; Kevin Porter (Dodgeball) as Armstrong; Ciera Foster (Two and a Half Men) as Livewire, and Derek Theler (Freeform’s Baby Daddy) as X-O Manowar; among others yet to be revealed. The series will be produced by Dinesh Shamdasani, Josh Johns, and Gavin Cuneo for Valiant Entertainment.
In 2017, Ninjak begins a steel-shattering trial by fire through the heart of the Valiant Universe itself! Now, prepare for the high-powered firefight that is come as Ninjak, Bloodshot, the Eternal Warrior, Livewire and more of comics’ most indelible heroes usher in VALIANT DIGITAL’s upcoming, live-action showdown with the NINJAK VS. THE VALIANT UNIVERSE line of variant covers – available in comics shops everywhere all summer long!For more information, visit Valiant on Facebook, Twitter, Tumblr, Instagram, and ValiantUniverse.com.