While it is not starting to this summer, Valiant unleashed this past weekend at Emerald City Comic Con, the first look into the next arc in Harbinger Renegades by Rafer Roberts & Darick Robertson, “MASSACRE.” It will bit a new H.A.R.D. Corps, who were last seen in the end of Imperium, against the Renegades and more as no psiot is safe. And this arc is the lean into to the 2018 event, Harbinger Wars 2!  The Renegades are already going to be dealing with Alexander Solomon’s manipulations but till have to content with the H.A.R.D. Corps as well. And at the end of Massacre, at last 1 hero will die. Check out more details below.
—–
ECCC 2017: Death Comes to Valiant for “MASSACRE” in HARBINGER RENEGADE #5 – Coming in July!
“THE ROAD TO HARBINGER WARS 2” Officially Begins with a Four-Part Assault by Rafer Roberts & Darick Robertson 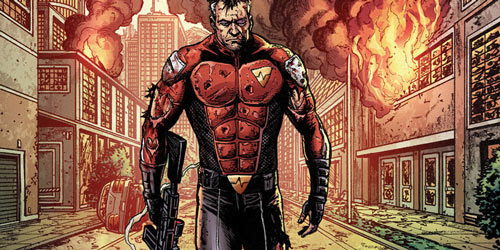 This summer…a major Valiant hero will fall as the countdown to HARBINGER WARS 2 begins!

“The death that occurs in HARBINGER RENEGADE #5 is going to have a profound effect on the trajectory of the Valiant Universe for at least the next year,” said Valiant Editor-in-Chief Warren Simons. “HARBINGER has always been about the stakes and real-world consequences of power in practice. The events of ‘MASSACRE’ are going to rip through the Harbinger Renegades like a shockwave. This is a key moment that will directly lay the groundwork to HARBINGER WARS 2.”

“Everything we’ve already done in HARBINGER RENEGADE and everything we are going to do is akin to placing bricks along a path,” writer Rafer Roberts told Comic Book Resources. “We are building a road; a road that leads to war.”

Toyo Harada’s former protege – Alexander Solomon, a “psiot” with the ability to predict and analyze potential futures – has been waiting for this moment. With the Harbinger Renegades – Peter Stanchek, Faith, Kris Hathaway, and Torque – now reunited as a result of his covert manipulations, his ultimate gambit can now begin. But he’s not the only one who has been watching. Major Charlie Palmer has just re-assigned a new division of the militarized psiot hunters codenamed H.A.R.D. Corps to active duty…and they’re about to bring a torrent of blood and calamity roaring into the streets of a major American metropolis for an all-out firefight.

The Harbinger Renegades. Livewire. Alexander Solomon. Generation Zero. Toyo Harada. Secret Weapons. Imperium. None of them are safe…and, when the smoke clears, a pivotal Valiant hero will become the first sacrifice of the massive Harbinger War that is to come.

Plus: Also coming in the pages of “MASSACRE”…discover the true face of the antagonist that will bring HARBINGER WARS 2 to bear in 2018! The first appearance of Valiant’s most formidable villain yet happens right here, only in HARBINGER RENEGADE #5!

This summer, the Valiant Universe reaches a critical turning point as the H.A.R.D. Corps incites a “MASSACRE” that will reverberate for years to come…and each of the Harbinger Renegades stand on guard to honor the fall of a comrade in arms. Rafer Roberts and Darick Robertson begin THE ROAD TO HARBINGER WARS 2 with a bang, only in HARBINGER RENEGADE #5 – coming in July!

For more on what awaits in “MASSACRE”, join writer Rafer Roberts alongside Valiant Editor-in-Chief Warren Simons and Valiant CEO & Chief Creative Officer Dinesh Shamdasani this weekend for the VALIANT: THE ROAD TO HARBINGER WARS 2 panel presentation on Sunday, March 5th at 2:30 p.m. PT in room TCC301!