X-O Manowar’s new ongoing series is getting the push from Valiant it deserves. The new series’ first issue is set to hit stores in March 2017. We will see what Matt Kindt, Tomas Girello and more do with Aric as he returns this March and you get a look in this week’s Previews.
Press Release 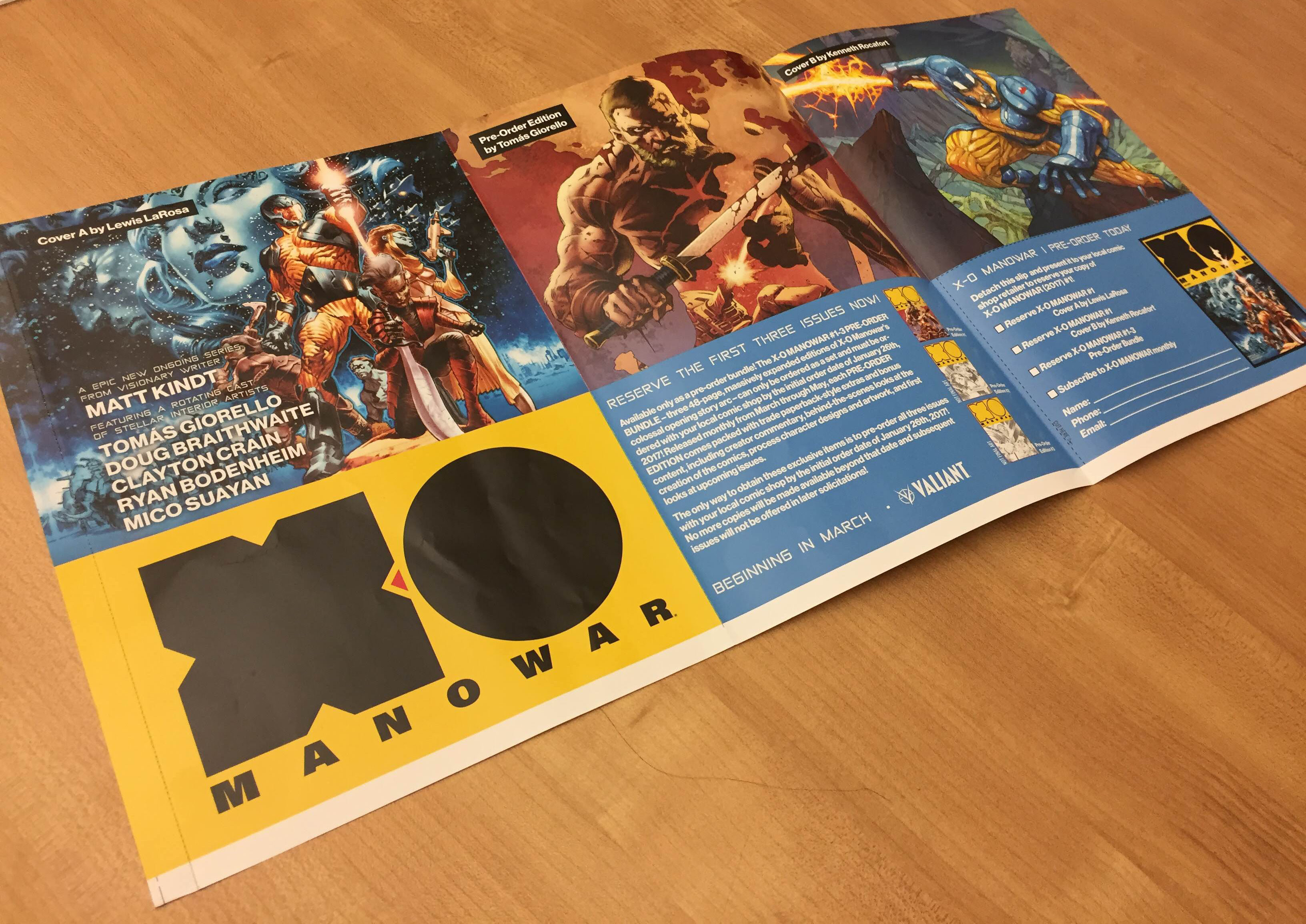 Born under the oppressive thumb of the Roman Empire, Aric of Dacia learned warfare at an early age. It was amid such violence that he was abducted by an alien race. Forced into slavery, he survived where others perished. His escape would come from bonding with a weapon of immeasurable power: the X-O Manowar armor. With it, he returned to Earth…only to find himself stranded in the modern day.

But that was a lifetime ago.

Now, far from home on a strange and primitive new world, Aric has begun a new life. Liberated from his past, he tends to his crops. Free from war. Free from violence. Free from the armor.

But the machinery of death marches his way once again. Conscripted into an alien army and thrown into an unforgiving conflict, the fury inside him finds voice as he is forced to embrace the armor once more. With it, he will decimate armies, topple empires and incite interplanetary warfare as he rises from SOLDIER to GENERAL to EMPEROR to VISIGOTH. They wanted a weapon. He will give them war!

In the wake of “SOLDIER”’s staggering assault in issues #1-3, X-O MANOWAR then continues in 2017 and beyond as a superstar cast of Valiant’s most acclaimed artistic talents chart Aric’s path from SOLDIER to GENERAL to EMPEROR to VISIGOTH for a vicious, year-long journey of bone and bloodshed born from the battlefields of a herculean alien empire:

“Over the course of the winter and spring, Valiant will be putting an unprecedented amount of resources behind X-O MANOWAR #1 – a series that is already on course to become our single biggest launch title of all time,” said Valiant Publisher Fred Pierce. “From editorial to marketing and sales, X-O MANOWAR #1 represents the largest and most aggressive coordinated effort we’ve ever undertaken, and with good reason: This is a damn good series, and we want everyone to be aware of just how exceptional X-O MANOWAR will be. As we push harder than ever to showcase this truly stunning title, you can rest assured that this gatefold insert is just one of the many exciting promotional plans we have in store.”

Packed with blistering artwork and a complete guide to innovative new offerings like the X-O MANOWAR #1-3 PRE-ORDER EDITION BUNDLE and X-O MANOWAR #1 BRUSHED METAL VARIANT COVER – printed via special process on real-life brushed aluminum – get the jump on the seminal series of 2017 as X-O Manowar’s journey from “SOLDIER” to “GENERAL” to “EMPEROR” to “VISIGOTH” starts here with this one-of-a-kind countdown to Valiant’s latest ongoing series – printed on a massive, six-panel gatefold and only available in PREVIEWS catalog #340!

Plus: Valiant is also rewarding fans who reserve copies of X-O MANOWAR’s complete opening story arc in advance with their local retailer with the X-O MANOWAR #1-3 PRE-ORDER EDITION BUNDLE!

Available only as a pre-order set, the X-O MANOWAR #1-3 PRE-ORDER EDITIONS must be ordered as a complete bundle at your local comic shop by the initial order date of January 26th, 2017! Released monthly from March through May, featuring exclusive covers by series interior artist Tomas Giorello and clocking in a colossal 48 pages each, every PRE-ORDER EDITION comes packed with trade paperback-style extras and bonus content, including creator commentary, behind-the-scenes looks at the creation of the comics, process character designs and artwork, and first looks at upcoming issues.

The only way to reserve these exclusive copies is by pre-ordering all three issues at your local comic shop by January 26th, 2017. Further copies will not be available beyond that date and subsequent issues will not be offered in later solicitations, so don’t miss your chance! Simply copy one of the pre-order coupons included in this month’s Previews catalog or in every issue of Valiant’s January-shipping comics releases and present it to your local comic shop to reserve your X-O MANOWAR #1-3 PRE-ORDER BUNDLE.