Action Lab: Danger Zone and The Broken Infinite are partnering to give ten lucky fans a truly unique comic. Releasing simultaneously with Infinite Seven #1, the publisher and news site are combining forces to offer a chance to win one of only TEN “Broken Infinite” variants of Infinite Seven #1 by artist Matt Harding!* 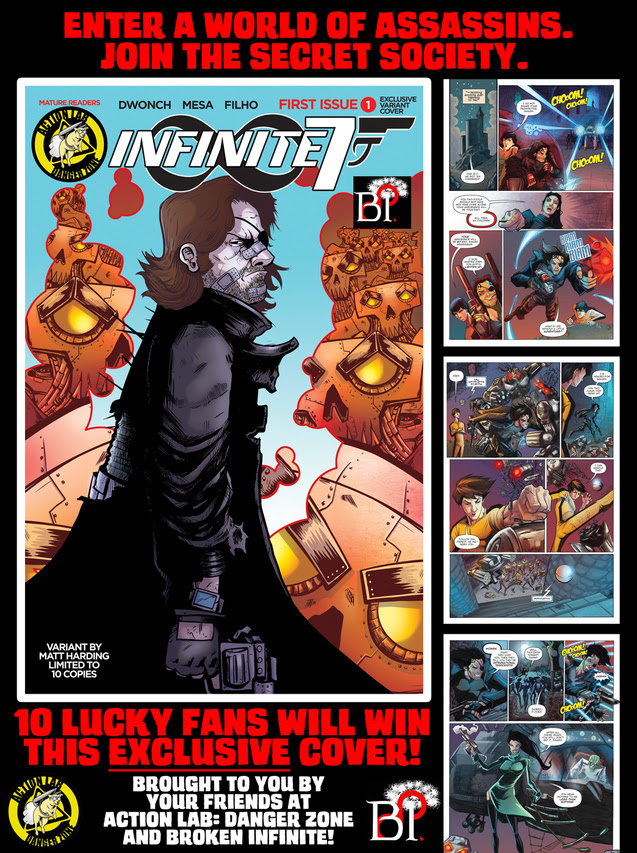 For centuries, a secret world government has employed the INFINITE SEVEN, the world’s greatest assassins to do their dirty work. The only way to become one of their members is to prove your worth by killing one of their members. But what happens when Anthony Zane, a teenage boy from the suburbs does just that?

Infinite Seven is an all-new monthly ONGOING series with interlocking variant covers for issues 1-4. Fans of 80s cartoons, the X-Men, Alan Moore’s League of Extraordinary Gentlemen, and action movies like Enter the Dragon, the James Bond films and The Expendables (you know, it it were good) will LOVE Infinite Seven!

Written by Dave Dwonch (Cyrus Perkins and the Haunted Taxi Cab), with art by Arturo Mesa and colors by Geraldo Filho, Infinite Seven promises to be the blockbuster comic you’ve been looking for!

The regular ongoing series begins in Feb. 2017, and this is your chance to be a part of the ACTION!

*Contestants agree to join Action Lab’s Newsletter, and addresses will be used in the event that you are picked to receive one of the (10) ten exclusive BROKEN INFINITE editions of INFINITE SEVEN #1. This information is 100% safe and will not be sold or distributed. All winners are picked at random. Only one entry per person. Winners will be notified via email by January 15, 2017. Good luck!