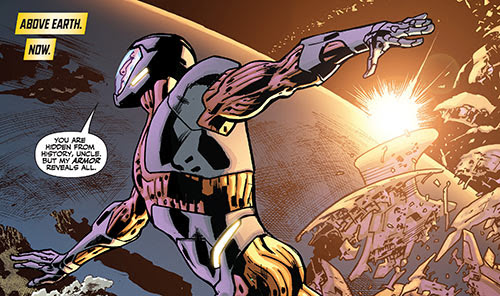 VALIANT FIRST delivers another must-read milestone this May with a blockbuster, 48-page celebration of X-O Manowar’s 25th issue…and an essential introduction to the comic book event of 2014 – ARMOR HUNTERS!

Find out why the galaxy’s most feared team of hunter-killers have journeyed across the stars to destroy the X-O Manowar armor and the Earth along with it in ARMOR HUNTERS: BURIAL by Robert Venditti & Diego Bernard. Then, revisit the roots of Aric of Dacia’s transformation from Visigoth conqueror into the 21st century’s alien-armored guardian, as told by Robert Venditti & J.G. Jones! Plus, all-new tales of X-O Manowar from Robert Venditti & Bryan Hitch, Justin Jordan & Rafer Roberts, Tom Fowler, Sean Chen, Cary Nord, Andy Runton, and much, much more!